We believe amazing historical cities are best experienced with a local guide, who are knowledgeable and in love with their region.

Discover Mostar: the fifth-largest city in the country, and the most important in Herzegovina. Walk through its old city by the Neretva river and visit the famous Old Bridge, built by the Ottomans in the 16th century. Today the bridge is a symbol of peace for the 3 ethnic groups in the region: Croats, Serbs and Bosnian Muslims – Bosniaks. Mostar is also famous for its street market and shopping area.

Experience a blend of cultures and amazing history of Bosnia & Herzegovina.

Tell us where you are: Split, Dubrovnik, Sarajevo and more 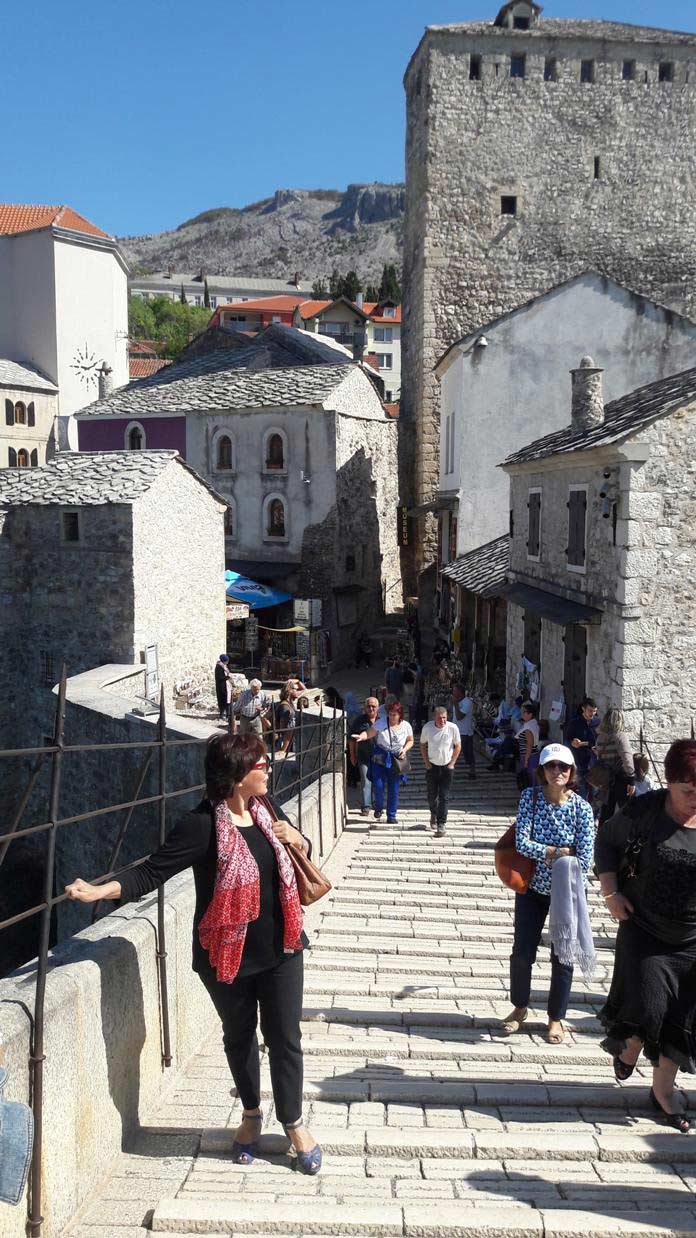 Walking up and down the Old Bridge is a unique experience

This amazing tour starts in the morning when we pick you up at your accommodation at a time chosen by you. The drive takes place in a comfortable car or minivan with a driver/guide in English, or another language of your choice, always ready to give you lots of interesting information about the country, people, culture, etc.

We will start by exploring Mostar’s old city and its important landmarks. We usually start the visit from the right river bank, commonly known as the Croatian Catholic side, where the Catholic Church and Franciscan Monastery are located. We will continue the walk through its narrow stone streets, passing through the city’s street market with its Turkish influence, until we reach the river bank and the most famous landmark: the Old Bridge. Here you will have time to admire its construction, river and amazing surroundings. After we cross the bridge to the left bank, known as the Muslim side, we will visit many sights, the most important being the Koskin-Mehmed Pasha’s Mosque, with its amazing view of the Old Bridge from the minaret and the Bišćevića House, where a typical Turkish house can be visited.

Mostar is located in the Southern part of Bosnia & Herzegovina

Once you book the tour we will arrange the most convenient meeting point in Mostar.

If you are in any other city and would like to visit this attraction, contact us and we will advise you on arranging a transfer from your location! 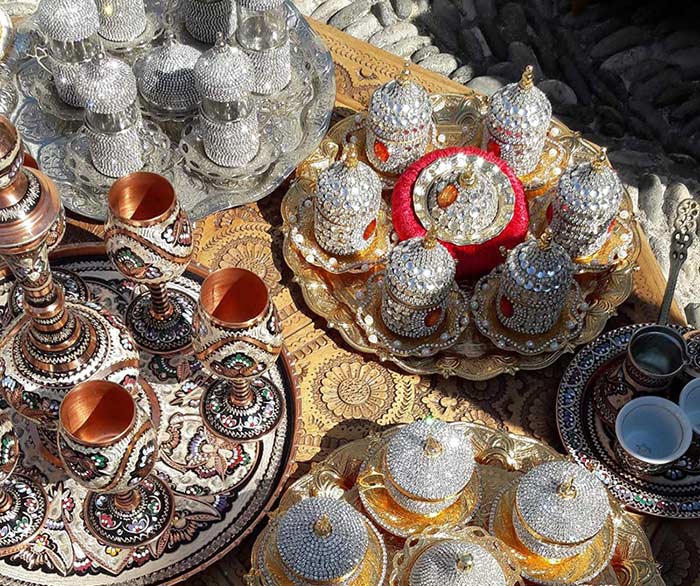 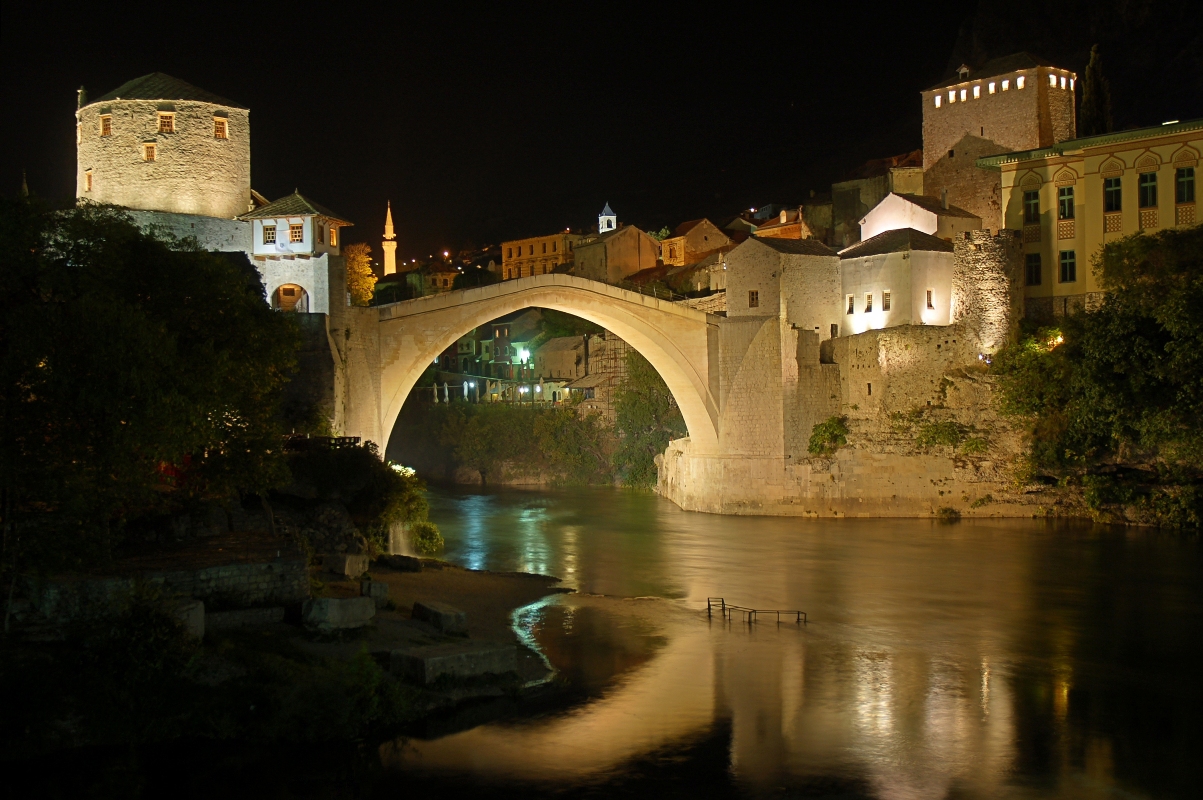 Mostar’s old town is an important tourist destination in Bosnia and Herzegovina, with the Old Bridge (Stari Most) being its most recognizable landmark. The city is architecturally diverse with a wide range of styles due to its exposure to foreign influences, making it possible for tourists to visit the Italianate Franciscan church, the Ottoman Muslibegovića house, the Dalmatian Ćorović House and an Orthodox church.

Old Bridge, or Stari Most for the locals, was named after the bridge keepers (mostari) who guarded the bridge in medieval times.

The city was first mentioned in the 15th century, in documents that described a market used by traders, soldiers and travelers, on the left bank of the river Neretva, connected by a wooden bridge. In time, the market grew, spread to the right bank, and formed a settlement that connected Bosnia’s central region, extremely rich in minerals, with the Adriatic.

Mostar saw major development during the Ottoman rule, when a fortress was added to the bridge, new houses built, and the wooden bridge replaced by a stone bridge. In 1878, Austrian Hungarian forces took control over Bosnia and remained in the region until the end of World War I. Then, in 1918, it became part of the State of Slovenes, Croats and Serbs and later Yugoslavia.

Built in 1566 at the order of Sultan Suleiman the Magnificent, the old bridge was built with stones and measured 28 meters long and 20 meters high. It was a symbol of the Ottoman power in the region and it stood in its place intact until November 1993, when it was destroyed during the Bosnian war. The reconstruction started in 1999 and was completed in 2004.

“If you are up for it, and don’t feel claustrophobic, climb the narrow minaret inside the Koski Mehmed pasha’s mosque. From the top, you will have the most amazing Mostar city and Old Bridge views.”

“Try a cup of traditional Bosnian coffee in the restaurant in front of the Blagaj Tekke. Relax to the soothing sound of the Buna river flowing under you and enjoy the beautiful Tekke view.”

“We visited Mostar from Dubrovnik last summer and loved it. Nataša was great with giving us information while driving, so the almost 2 hours inside the car to reach Mostar were fun and informative! The city’s old bridge wowed us, and even made us forget how hot it was! We were tight on schedule, but Bosnia enchanted us and we are planning another trip! “

“We were told by friends that Mostar was a must see in our trip to Split. We liked the idea to add another country to our vacation, and see a different culture, as Croatia is mostly Catholic and Bosnia has a lot of Muslim influence. Amanda organized the daytrip for us, was also our guide and made the day very pleasant! We also loved her restaurant recommendation in Mostar, and ended up even ordering what she suggested! Great tour agency! 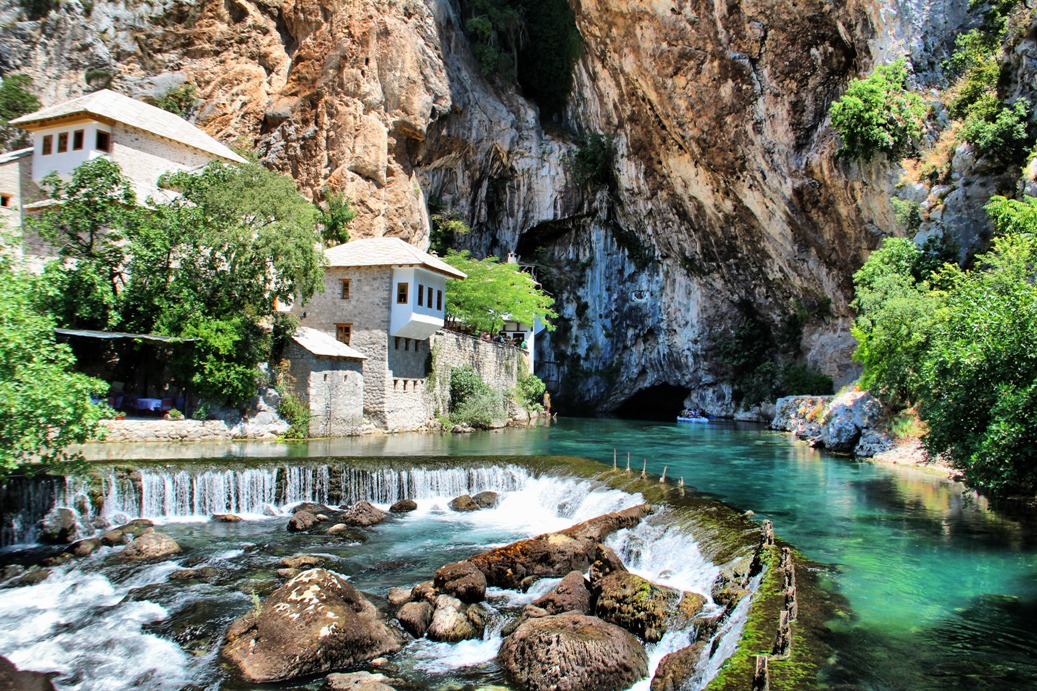 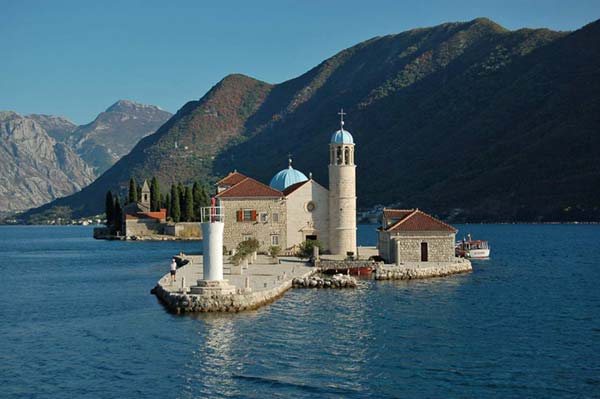